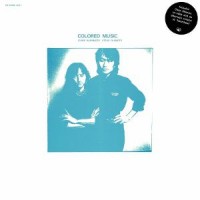 You can always trust Rush Hour's Japan series to deliver some incontinental magic, but this tasty 12" is exceptonal even by their gih standards. Firstly it gives the DJ a handy wax of the two finest tracks from Colored Music, but secondly they land enhanced and extended by famed Japanese digger and DJ Chee Shimizu (of Organic Music fame).
The two cuts originally featured on the band's seminal self titled album from 1981 and 'Heart Beat' remained a cult DJ secret weapon, for many years all over the world. This heavy EP includes an alternative version of 'Heart Beat' that featured on the Japan only "Individual Beauty" LP of 2018 (also compiled by Shimizu).

Patrick says: If you know, you know. In case you don’t, these two unclassics from Japan’s Colored Music offer narcotic synth pop laced with industrial idents and proto Detroit thrust.

Little RichardPoor Dog / A Little Bit Of Something