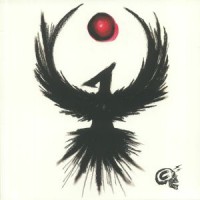 After being summoned from Ohio to London by Adrian Sherwood, Nick Riggio and Rebecca Magnetic have brought their Midwest musical experience to the South London electronic music scene with a unique creative vision. Fusing elements of techno, post-punk and psychedelic rock they explore spiritual connections and transcendence while Rebecca Magnetic's introspective vocals set against a tough backdrop of Detroit influenced rhythms and vibrations leave you in awe.

Their superb single 'My Future' is a brilliantly cosmic exploration of spaced out and spacious grooves. Crashing hits bring an edgy mood, while lurching drums drag you forwards.
Molten acid synths and the strained and pained vocals from Rebecca add further layers of intrigue to this most adventurous electronic trip.

First to remix is Oosh! man Dan Wainwright, and his version is laced up with sci-fi chords and echoing vocal sounds. The downtempo drum rotations are superbly heavy and trap you in a trance.
Next up, Retroforward is Al Mackenzie's solo remix/music project named after his successful Birmingham night.
Al is one half of Field Of Dreams. His 'No Future' remix is an airy and atmospheric remix that takes the track to the farthest edges of space on smooth, hypnotic grooves and beautifully astral melodies.

Lastly, Richard Sen has already been getting support for his remix from ALFOS man Sean Johnston, and he goes for a superbly rugged yet slow motion chugger that is dubbed out and expansive thanks to the arching guitar riffs that ring out to the heavens above fat-bottomed drums.

Whether experienced on the dance floor or in metaphysical states, this music is medicine for the mind and body.

Patrick says: In a cracking week for 12"s, this cosmic stomper is as good as any. In its original form "My Future" sounds a bit like a sci-fi Siouxsie as a Pythian oracle, prophesying doom over a chugging, dub-tinged EBM growl AKA amazing! The Retroforward mix picks up the tempo in acid house stylee, while Richard Sen and Dan Wainwright embrace the slow slanking style in ultimate dub mode. 5 mushrooms out of 5.