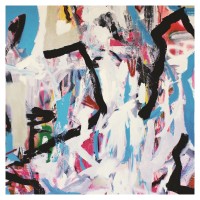 Commissioned by the Chicago Cultural Center in 2005 to assemble a group representing the diversity of the city’s avant-garde, Mazurek began composing for what became his Exploding Star Orchestra (ESO). Including musicians from the often-segregated North, South, and West sides, ESO debuted in the urban epicenter of Chicago’s Millennium Park and, shortly after, recorded We Are All From Somewhere Else (Thrill Jockey, 2007). By the time of Galactic Parables Vol. 1, ESO’s 2015 triple LP on Cuneiform Records, Mazurek reflected to Pop Matters that “Exploding Star Orchestra is the conceptual, compositional and philosophical center of all my work... a life star of musical and visual and ideas."

In 2018 JazzFest Berlin invited Mazurek to present a new iteration of ESO. Meeting the commission with the boundless ambition characteristic of his approach, he imagined a jubilee of musicians – true to ESO’s essence in their widely diverse backgrounds and voices, but more tightly arranged than ever before. Mazurek’s debut was an ecstatic and wholly original program that marked a pinnacle in his distinction as a composer and conductor of Contemporary Music. When he returned to Chicago, International Anthem took the opportunity to capture these new ESO compositions with a cast of collaborators from their collective constellation of artists. In the studio between August 2019-March 2020, Mazurek channeled his arrangements through 11 musicians – Nicole Mitchell, Jeff Parker, Jaimie Branch, Joel Ross, Mikel Patrick Avery, Tomeka Reid, Chad Taylor, Ingebrigt Håker Flaten, Macie Stewart, Angelica Sanchez, and John Herndon – and commissioned his long-time collaborator Damon Locks to do lyrics and vocals. After 3 months of rigorous post-production, editing and assembly, Mazurek completed Dimensional Stardust.

Somehow swirling adventurous elements of avant-garde jazz and contemporary classical into the most universal attractors of pop music, the cosmic opera of Dimensional Stardust is a pure spiritual extension of Exploding Star Orchestra’s unifying ethos, and a peak in the prolific creative career of Rob Mazurek.

A1. Sun Core Tet (Parable 99)
A2. A Wrinkle In Time Sets Concentric Circles Reeling
A3. Galaxy 1000
A4. The Careening Prism Within (Parable 43)
A5. Abstract Dark Energy (Parable 9)
B1. Parable Of Inclusion
B2. Dimensional Stardust (Parable 33)
B3. Minerals Bionic Stereo
B4. Parable 3000 (We All Come From Somewhere Else)
B5. Autumn Pleiades