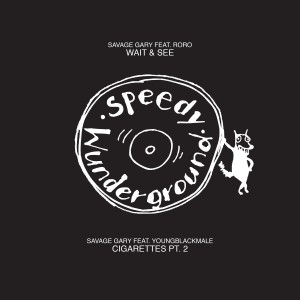 Despite current circumstances – Speedy Wunderground have had a busy year. The London-based label run by producer Dan Carey alongside Alexis Smith and Pierre Hall were recently coveted with the ‘Best Small Label’ Award by AIM (Association of Independent Music) after being nominated for the second year in a row. When COVID hit – bringing bands into the studio wasn’t an option and so the label started an ongoing project called ‘THE QUARANTINE SERIES’ in which Carey under his ‘Savage Gary’ techno/electronic alter ego collaborated with artists and friends, old and new over the internet and then uploaded them to the labels Soundcloud/socials with little or no fanfare – no PR-ing or radio pluggers, just letting them do their own thing, organically.

First on the release is ‘Wait & See’ from rising Bajan artist RoRo. A hypnotic masterful flow which meanders seamlessly around Carey’s pulsating electronics. It’s bursting with attitude and originality. ‘I saw Dan Carey play with Kae Tempest on one of my first few times ever being out in London’ she says, ‘it was such an amazing show. I was extremely excited to then get the chance to work with him. I'd been trying to do so while in London, but it didn't quite work out that way. We did manage to make it happen remotely whilst I was back in Barbados though, and we knocked it out!’

Second is ‘Cigarettes Pt. 2’ from the enigmatic Londoner youngblackmale AKA Rutare Savage: ‘It’s a poem, transformed into a song by the ever amazing Dan Carey. It touches (lightly) upon the topics of fear of the police, drug and alcohol abuse, family, and pulling oneself out of a nihilistic worldview driven by a newfound lust for life. This is me trying to reason with the void.’