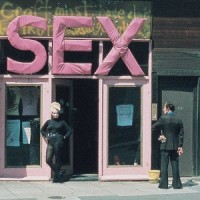 First time ever on vinyl, the legendary compilation taken from the infamous Kings Road ‘SEX ’shop jukebox. Curated by Marco Pirroni of Siouxsie & the banshees, Adam & the Ants and SEX shop regular, a hand-selected treasure trove of underground/outsider classics – All of which were on heavy rotation throughout the mid-70s on Malcolm and Vivienne’s SEX boutique jukebox..

“…in my all-important role as ‘Sex’ shop layabout 1974-1976, it was my self-appointed duty to sit around and do nothing except be snide about everyone who came into the shop and continually play my favourite 20 records on the jukebox over and over again, until Jordan or Michael could stand no more and pulled the plug out of the wall……

.. I had never heard of any of the 19 artists who had made my 20 favorite records (I still haven’t) and couldn’t imagine what they were thinking when they made them (I still can’t) but whatever it was they were thinking, they believed it - body and soul - and were making the records they wanted to make against all odds, including at times their own lack of talent. The one thing I learnt from those days was that it’s more important for an artist to be actively discouraged than encourage”

“Memories of a jukebox. The first thing we did when going into the shop was head to the jukebox and fire up some music. It was great listening to all those 50’s/60’s tracks and it was a bit of an education music wise.

Blasting out great Rock’n’Roll, Garage / Rebel Rock, it had to be the coolest jukebox in London at the time and we’d spend hours hanging around, digging the scene and looking cool. As time went by we’d add our own 45’s into the mix but the jukebox choice had Malcom’s stamp all over it with a selection of outsider, freaky misfits. ..Long live outsider, freaky misfits and R’n’Rollz “

Side A
1. The Count Five - Psychotic Reaction
2. The Creation - Through My Eyes
3. Clarence "Frogman" Henry - Ain't Got No Home
4. Flamin' Groovies - Shake Some Action
5. The Spades - You're Gonna Miss Me

C Side
1. The Moontrekkers - Night Of The Vampire
2. Screaming Lord Sutch And The Savages - Monster In Black Tights
3. The Troggs - I Can't Control Myself
4. Screamin' Jay Hawkins - I Put A Spell On You
5. The Sonics - Have Love Will Travel