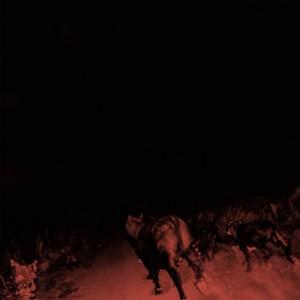 Released in 2018 to widespread critical acclaim, Bambara’s Shadow On Everything represented a decisive step forward for twin brothers Reid and Blaze Bateh – frontman and drummer, respectively – and their childhood friend, bassist William Brookshire. While prior to its release they had always been adept students of noise rock and post-punk, mining the work of bands like Swans and The Birthday Party to construct what NPR called “beautifully dynamic nightmares,” on Shadow they boldly redefined their sound to create an album that clearly transcended their early influences and dramatically quickened the pace of their ascent from the underground. Consistent with their frenetic live set, the musical center of Shadow On Everything is Bambara’s impossibly tight rhythm section, with Blaze’s manic drumming and William’s rock-steady basslines serving as the perfect canvas for Reid’s wild guitar squalls and howled vocals.

But the album’s recording marked the first time that Reid’s voice was pushed to the front of the mix, highlighting the damaged characters and seedy locales that interact and overlap throughout its 12 songs. A stridently experimental record, Shadow features everything from violin to saxophone arrangements, and is meticulously interspersed with outré ambient noise loops distilled down from hours of manipulated vocal collages. Just two years after its release Shadow On Everything may seem like it was the logical next step for a band with experimental and punk origins that would go on to construct the intricate compositions displayed by its follow up Stray. In fact, Shadow memorializes Bambara putting everything on the line because they knew they could be more than what anyone may have seen in them up to that point in time.