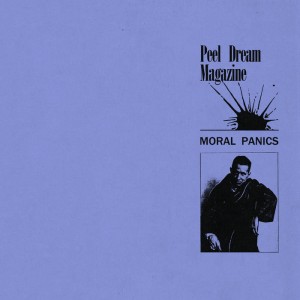 Vinyl pressing of their 8-track ‘Moral Panics’ EP, featuring 6 brand new tracks. This follows its digital and lathe cut only release in July.

Featuring the original 6 unreleased tracks recorded during the sessions for their recently released second album Agitprop Alterna which was released in April of this year, two further exclusive tracks are added to their vinyl pressing. Talking about the EP, Joe Stevens, the main artistic force behind Peel Dream Magazine said: Moral Panics is an EP featuring unreleased songs from the Agitprop Alterna recording sessions over the course of 2018 and 2019. It's kind of like a sibling to that record as well as the Up and Up EP from 2019. The title comes from Stanley Cohen's Folk Devils and Moral Panics which talks about Mods in England during the 1960s. Cohen talks about how the English press and politicians benefited from vilifying that cultural phenomenon, and I wrote about it in the first track New Culture, as well as Permanent Moral Crisis off the LP. I'm really into everything Mod . . . I think it's something I come back to again and again. These songs definitely create their own vibe but they're still connected to Agitprop Alterna . . ." Peel Dream Magazine is the musical vehicle for NYC's Joe Stevens, who launched the band in 2018 with the critically acclaimed album Modern Meta Physic. The debut was a mysterious, liminal tribute to the hazy end of ‘90s dream-pop – a masterful mix of first-class songwriting precision and train-window sonic impressionism. Stevens played all the parts on Modern Meta Physic himself, blending live and sampled sounds into uniquely identifiable and abstractly psychedelic soundscapes.

The album struck a perfect balance between DIY bedroom pop auteurism and studio wizaJoe Stevens, the rdry, and duly found its place on numerous “Best of 2018” lists. Where the creation of Modern Meta Physic was a solitary pursuit, Agitprop Alterna found Stevens channelling the collaborative spirit of the band’s ever-rotating live incarnation in the studio. He worked with close friend Kelly Winrich to develop new sounds for the project, creating musical snippets that Winrich would mix into the cohering whole. Live band members like vocalist Jo-Anne Hyun (later replaced by Isabella Mingione) and drummer Brian Alvarez would stop by and work their magic on the recordings, laying down parts with trademark exactitude. The resulting music revels in its realness: heavier, more dynamic, and truly the work of a band.

1. New Culture
2. Verfremdungseffekt
3. Dialectrics
4. Through You
5. Life At The Movies
6. Geodesic Dome
7. The Furthest Nearby Place
8. Clean Water (DEMO)