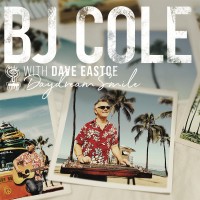 BJ Cole is back with first original music in years....and it is HAWAII'AN! Featuring guitarist Dave Eastoe and special guests this one is special. So after over 50 years in music, what has B.J. Cole left to achieve? Award winning multi-instrumentalist B.J. Cole, began his career gigging with Irish Country bands on the US Airforce bases around the UK in the ’60’s. He went on to be a founder member of the psychedelic Country Rock band COCHISE, who recorded three albums for United Artists and shared stages with Hawkwind and a demo studio with Elton John. After working with EJ on ’Tiny Dancer’, BJ became established on the British recording session scene and went on to record with most of the greats of popular music, including: Steve Marriott, Scott Walker, Dave Gilmour, Dave Edmunds, Albert Lee, Gerry Rafferty, Sting, Bjork and on and on: and continues to do so to this day. As a recording artist, BJ has covered most of the stylistic territories, beginning with the psychedelic prog of 1972s ’The New Hovering Dog’ for United Artists, and then a hiatus due to the demands of his busy session career. Until 1989 and his breakthrough ambient album for Joe Boyd’s Hannibal Records, ’Transparent Music’, that combined Enoesque soundscapes with lush arrangements of Debussy, Satie and Ravel.


Not content with dragging his Pedal Steel into the Concert Hall; BJ then sought out new territory in the world of Electronica, BJ worked with such leading lights of that genre as Aphex Twin, Squarepusher and Luke Vibert, which resulted in his groundbreaking 2000 album for Astralwerks / Cooking Vinyl, ’Stop The Panic’. Since then, BJ’s records have been largely experimental, and designed to expand the musical remit for the Pedal Steel, boldly going ever more deeply into the territories of Jazz and Classical Music; and then ...Where? Well, back to his roots of course. To his passion for the lyricism of Hank Marvin’s guitar, Santo & Johnny’s ’Sleepwalk’ and the music of the Hawaiian Islands, the sounds that ignited his musical flame. So who is Dave Eastoe? Dave is a great musician, a magician, a dabbler in essences, most which he found in his frequent sojourns in the Hawaiian Islands; a place and culture that he deeply loves. But to BJ’s great good fortune, he is the right person at the right time.


BJ and Dave write intuitively together and Dave can play the Hawaiian Slack Key guitar style like a native. The musical chemistry between BJ and Dave is what makes this record possible. So what’s the big deal about Hawaiian Music? Without going into too much historical detail, the music of Hawaii was a smash around the World from its introduction into mainland United States at the beginning of the 20th Century, until it was eclipsed by rock ’n’ roll in the late 1950s. Hawaiian musicians brought steel string guitar madness to the United States and helped to lay down the musical culture that influenced the evolving styles of American popular music, the blues, western, cowboy and country music. And of course, without Hawaiian music, crooning would never have happened. Above all, ‘Daydream Smile’ is a statement by two friends who have a love for the music and culture of the Hawaiian Islands. It may not be particularly authentic, but it is passionate. It’s about time that the music of Hawaii was properly recognised for the vital role it played in the development of Americana and in the history of American popular music. Dave Eastoe: A lifelong musician / composer, Dave turned his skills to sounds and music that influence consciousness and states of being. During the 1980s he created 16 albums of music for this purpose, sold in the UK and Europe, then travelled widely with Tibetan singing bowls and Sonic therapy workshops, featuring on BBC Radio 4’s ‘Afternoon Shift’, then ending up in Hawaii where over 12 lengthy visits he found the local Slack Key guitar styles and the spirit of that music infused itself into his playing. Whilst developing a deep love for this musical form, Dave began making recordings, only too aware perhaps of their cultural and geographical displacement in the UK, and was very happy to find his old friend BJ interested in creating a project based on Hawaiian themes.