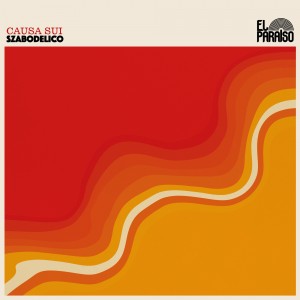 Something different from Causa Sui. While Causa Sui have always had one foot in heavy psychedelic rock, they've had the other one deep in a wide variety of esoteric styles. On this new double LP set, that other dimension of the band is being explored full-scale. ”Szabodelico” paints with a colourful palette, both compositionally and sonically - digging deep into an assortment of cultures, eras and sounds with a true crate-digger mindset. Throughout their 15 year life-span Causa Sui has always been about seeking out new directions, exploring the past and the present in a way that's unique at each step of their subtle progression - forging new paths into an existing map. ”Szabodelico” feels like discovering a small room under the stairs of your own house: familiar, yet new and exciting. Their latest vision is an elegantly zoned-out version of itself: a turn inward. Anti-bombastic, yet rich with ecstatic harmonics and dynamics. The band stringed together a long series of sessions in 2019 and early 2020 in their studio in Odense, often prioritizing playful first takes and good vibes rather than clinical perfection.Sparsely dubbed and mixed with a natural, full bodied flavour by Jonas Munk during the summer of 2020, each track has its own aesthetic. There's no simple equation to sum up the 13 individual parts of the album, but as a whole it creates an entity that's as complete as each of its parts. From the windblown opener ”Echoes of Light”, to the closing slow-motion epic ”Merging Waters” you'll find yourself asking where did the time go? The answer of course is: Szabodelico.

Barry says: There have been little doubt for me that Causa Sui were one of the most talented outfits in the heavy psych field, but it never really clicked for me until these slightly more melodic, almost desert-rock pieces hit the speakers. It's a baffling mix of surf, psych and pop with a progressive edge, but without losing the frenetic inventiveness they've displayed up until now. Wonderful.