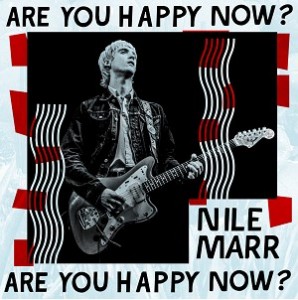 Manchester born guitarist and songwriter and son of Manchester music legend Johnny Marr, Nile Marr returned to his hometown to work on his new debut solo album. Having been brought up on the likes of Modest Mouse, Talking Heads and Broken Social Scene, Nile’s influences were there for all to see on his critically acclaimed album ‘TV Broke My Brain’. Released under the name Man Made in April 2016, Nile and his band spent years on tour transforming themselves into an accomplished live force. Building a cult like grassroots following in his hometown. Now under his own name, after a slew of successful E.P releases Nile has firmly established himself as one to watch out for as a rising star in Manchester. 'Are You Happy Now?’ was written underneath a club on Oldham Street with the energy of the city above him prior to lockdown, this album is an energetic and emotional dedication to the people of Manchester and all fellow indie heads.

Side B
1. Fake Your Way Through
2. The Pusher
3. Soft Sculptures
4. Perfect Crimes
5. Being There