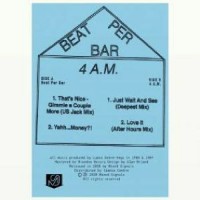 Under the pseudonyms 4 A.M. and Beat Per Bar, Lupos Sobre-Vega released two eccentric 12”s, of what, in retrospect, can be called vernacular house music. Both records are individualistic collisions of New Wave, Bass, Freestyle, Hi-NRG, Acid, and Sample House recorded in Sobre-Vega’s home studio in Orange County, Los Angeles. Using a Yamaha QX-5, Roland S-50, his mom's Roland Juno 60, EMU drum machines, and Yamaha DX-7, he put his nascent jazz chops to use and laid down the idiosyncratic dance tracks that he would self-release on his own label, House Hold Records, in 1988 and 1989 respectively. Although both 12”s were credited to groups, Sobre-Vega confirms that “the so-called band members were club friends. A couple were models and actors, or just plain good ol’ dancers. They were strategically picked by me, of course. So yeah, 4 A.M. and BEAT PER BAR are 300% me. There is no other.”

Despite working within the confines of dance music’s ready-made rhythms, Sobre-Vega’s sensitivity transcends the inarticulate 4/4 beat - vulnerable, idealistic and yearning. The timeless themes on the records reveal his youthful worries about money, intimacy, love and sex. Looking back at dance music history, it is luminaries such as Arthur Russell, Sylvester, Grace Jones, Theo Parrish, and Larry Heard, that stand out as enduring visionaries that transcended stylistic trends. Mixed Signals is proud to illuminate Sobre-Vega’s work in the constellation of dance music’s radical dreamers with this EP comprised of two songs from each his scarce and singular 12”s

Matt says: Nearly thirty quid?! I've literally just gafawd at that price tag! Elitism or the true value of art?? Risograph sleeve.. is it worth it? The music's really, really good; but I'll have to leave it to you to decide.