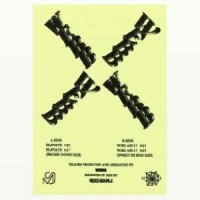 Raised in the musically fertile and adventurous atmosphere of Detroit, Webb got his start as a mobile DJ while in high school during the late 70’s. Captivated by the local boom of soul, funk and disco, he’d frequent the social clubs, soaking up sounds. His earliest experiments in mixing led him to form a DJ crew with his pal Paul Johnson. Paul enlisted a friend, Jeff Mills, pre-Underground Resistance, to join the trio and they called themselves Frequency Sounds. The three would play underground parties and college events for Michigan State students. Throughout the 80’s, Webb and his friends would play at the local clubs around town, like 431 East (now called Saint Andrews), where he played alongside Ken Collier and other Detroit legends. Each week he found new sounds at his local record shop Buy Rite Records on West 7 Mile, where he’d dig for Italo, New Wave, Disco and House, buying 12”s from labels like Prelude, Trax and Beggars’ Banquet on sight.

Webb’s earliest experiments with producing his own sounds started when he bought an Echoplex and ASR-X Drum Machine. During his sets he’d add live effects & rhythm to his favourite songs. This led to building a mini home studio where initially he would record all his songs overdubbing on two tape decks. Two of his earliest experiments, Elevate and Who Am I? Were self-released as a small- run promo 12” that he would hand out to his friends and local DJs. Webb quickly sold out and gave away the pressing, and he would often hear it played by DJs around town, but over time it drifted in the margins, as an obscure footnote in the history of Detroit Techno. Mixed Signals is proud to bring this important record back into circulation, seducing a whole new generation of DJs and dancers with Webb’s dark and silky pleasures.

Patrick says: Deep and groovy Detroit house here, dug up by the Mixed Signals family. While he's unknown to most, David Webb was in a DJ crew with Paul Johnson and Jeff Mills way back when - serious credentials - and this 12" bumps, grooves and glides in all the right places.

Memoryman Aka UovoDon't Mess With B / Pimpin' With Dolce Vita