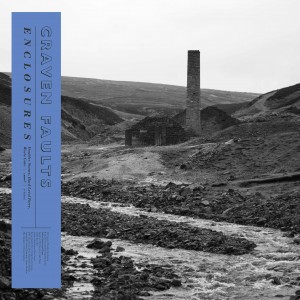 This mini-album is Craven Faults’s second vinyl release on The Leaf Label.
Thirty-seven minutes of music over three epic tracks - longform analogue electronic journeys across the north of England.

Enclosures follows Craven Faults’ debut album Erratics & Unconformities. These 37 minutes of music are the start of the next journey. New terrain and more refined methods of travel. Dark clouds gathering.

We’re out of the blocks quickly. German engineering carries us swiftly across the moors on a Saturday night rendezvous. Two almost identical mushroom shaped rocks are the destination. There’s evidence of previous rituals carried out. Two hours due north we go in search of the power source. Cascading. An experiment in performance over a fixed point. Tape loops recorded in 1967 at The Philadelphia College of Art. Woodwind purchased from a charity shop in Yeadon. The concept of work was forgotten. We’re back on the millstone grit of the Mid Craven Fault for an exercise in simplification. Familiar territory. Sometimes the theory isn’t all it’s cracked up to be, and there’s still power in hammering a single note over two chords – a lesson learnt from the American South in the late 40s and early 50s and boiled down in the late 60s. Olympic Sound Studios, April 1967. The Hit Factory, April 1969.

On Erratics & Unconformities, Craven Faults often found a calm inner space in the vistas. Here the tensions of the early EPs return, with a focus on how human ‘progress’ has impacted and shaped the landscape. How the land was divided now shapes our present and future, and retracing that journey is particularly pertinent.