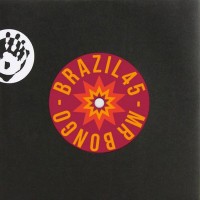 Mr Bongo's much in-demand series of classic Brazilian 45’s are back! Featuring a vibrant new design, they’ve curated yet more wants-list regulars and unearthed fresh finds from Brazil that are destined to become collector’s items in their own right.

Taken from the ‘D diva’ album from 1981, and originally released on Som Livre Records. A homage to the indigenous people and tribes of Brazil. The flip features one of Jorge’s most beloved Brazilian-Boogie joints, ‘Rio Babil nia’, which celebrates life in Rio, partying, the beach, and the city’s iconic monuments.

The song was originally released on a compacto and taken from the ‘D diva’ album from 1983, it features arrangements by the late-great, Lincoln Olivetti.