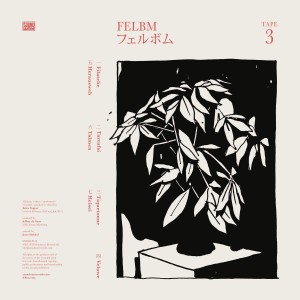 Following on from the success of his previous debut album “Tape 1/Tape 2” on Soundway, Felbm delivers Tape 3/Tape 4 - an intimate, emotional, lilting and melodic solo project.  These 14 lo-fi, instrumental, jazz-infused sketches were written on guitar, with cascading keyboards, vibraphone and drum machine. Possessing a restorative and soothing quality, it goes some way to balancing out a chaotic year for the world at large.
With echoes of the dreamier end of 1980s English indie-pop, minimal ambient music and Brazilian bossa-nova, Topper’s musical storybook includes touches of The Durutti Column, hints of Antonio Carlos Jobim and Baden Powell, whilst all set all firmly in the summer fields of Germany and the Netherlands.
The recording method used for the creation and recording of Tape 3 and Tape 4 follows the same as his previous release: all sketches were initially recorded onto cassette on a 4-track tape machine. Most notably a vibraphone finds its way onto almost every track fitting Topper’s sound-palette perfectly: warm yet distinctive, a percussive as well as sustaining sound that evokes some melancholy and a certain timeless nostalgia. Features that most certainly also apply to the other ‘new’ instrument on the tapes: mellotron flutes.
Tape 3/Tape 4 navigates the space between quiet, open, meditative tunes and more solid instrumental works, reflecting his constant search for an optimal balance between stillness and movement.

Reuben Vaun SmithSound From The Workshop