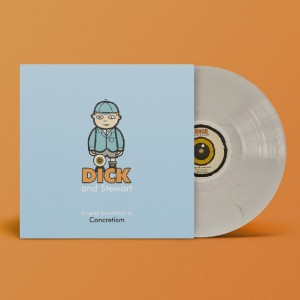 Dick and Stewart
Dick and Stewart is a series of short animations set in either Britain’s dismal past or the Britain that’s soon to come. It's hard to tell nowadays, isn't it? Either way, just imagine what it would be like if childrens’ TV programmes were written by George Orwell or Franz Kafka. Or the government itself.

The stories follow the adventures of the eponymous Dick and an eyeball, which is all that’s left of his best friend, Stewart, following an accident. It’s written, animated and directed by Richard Littler (Scarfolk), produced by Andy Starke of Rook Films (A Field in England, Free Fire, In Fabric) and read by Julian Barratt (The Mighty Boosh).
While each episode will address a different dystopian but topical subject, such as propaganda, civil defense, ‘fake news’, gaslighting and other forms of governmental corruption currently blighting western politics, the pilot episode, which is called ‘I Spy with my Little Eye’, concerns surveillance, an unsurprising theme given that, last year, the European Court of Human Rights ruled that the UK government's bulk interception of data was against human rights.

Concretism
Chris Sharp, the talent behind the Concretism project, takes inspiration from worlds exactly like those portrayed in Dick And Stewart. His last album, "For Concrete and Country" was a hugely successful distillation of our not too distant past/future world of nuclear threat and cold war paranoia, resulting in an album of unsettling electronics which perfectly invoked the pervasive cultural disquiet of intrusive surveillance, the red menace and the bomb. Fears which the recent drift of events confirm are still very much with us, remaining part of our societal DNA.

Having already established the working relationship with Richard Littler - Richard designed the adapted radome artwork for FCaC, Chris was the natural choice to provide the soundtrack for Dick and Stewart. Chris delivers his first soundtrack with relish, supplying a set of short, sharp electronic cues formed with his usual precision. Not a note is wasted as the woozy, unsettling themes of the films are effortlessly captured herein. It's fair to say that it's a piece of work that could not have been made by anyone else.

The record itself is pressed on a single sided 12' inch LP utilising a new process of UV printing on the reverse side which is only available from a select few manufacturers. The artwork as designed by Richard is incomparable and it all makes for an incredibly special and desirable album.

Chris has just completed his stunning and long awaited new LP and successor to "For Concrete and Country" which will be forthcoming on Castles in Space in early 2021. Meanwhile, a privileged trawl through his archives has resulted in "Concretism: Archive Volume One" a limited LP which will shortly be available to subscribers to the Castles in Space Subscription Library Service and features 9 tracks unavailable elsewhere and appearing on vinyl for the first time.