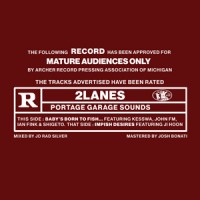 2lanes is part of the latest resurgence in Detroit's techno underground whose infamy is built via amorphous live appearances / DJ sets, collaborations with contemporaries like AceMo and John F.M., and a steady, hilarious and blunt presence on Twitter. 2lane’s 2nd piece of wax, the AA side "Baby's Born To Fish'' / "Impish Desires'' (following the "Giving & Receiving" EP on NYC's Ceramic Records, February 2020).

2 Lanes first appeared in Detroit around six years ago and quickly made a name for himself in the local scene, promoting shows with international artists and friends from NYC, all while making an effort to respect the city's unique musical identity and history. He carries the tradition of Detroit's electronic pioneers who pursued new ideas in production and gear, bringing perfection to the craft, and developing unique twists in his process.

Participating in the contemporary electronic music world required splitting your time between 2 places at once: Online, always-on, in constant engagement with friends + foe alike; In Real Life, physically traveling city to city, DJing and collaborating, all while maintaining a sense of self. And now, all that's different.

Releasing a club-ready 12" in the midst of a global pandemic? That's the 2 Lanes. We heard an earlier version of "Baby's Born 2 Fish" what feels like 10 years ago, rinsing "Impish Desires" when there were still gigs. Do you remember the Apollo Masters plant fire in early February? How long were pressing plants closed, again? How long have we been living in this new reality? 2lanes hopes that the messages of this music; fear, isolation, friendship, love and how we exist at this intersection comes through for the listener.

"Baby's Born To Fish" / "Impish Desires" is a heavy hitting AA side, rejuvenating, explosive, off your face. They're ready for the eventual return 2 the dance floor, and sooner for your streaming DJ set. We don't know when we can see you IRL, but we know it'll be in mixes for decades to come.

'You’re gonna cast your reel out and you don’t know if you’re gonna get a fish that day, but you’re still gonna cast it out.' - 2 Lanes


THIS RECORD HAS BEEN APPROVED FOR MATURE AUDIENCES ONLY.
credits
releases September 25, 2020

Matt says: Wow what's this?! BRAND NEW, hi-tek soul from Motor City! Excited? You should be. This is so fresh! Yet carries on where Recloose, Amp Fiddler and Carl Craig left off. Essential stuff then for Detroit music fans and deep house heads in general. Check!