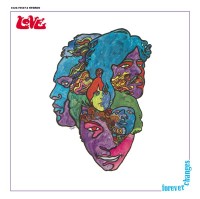 Formed in New York in 1965, Love are an American rock band and were one of the first racially diverse rock bands. They have been praised by critics for being one of the most influential rock bands of all time. Love’s iconic 1967 album, which features the classic song "Alone Again Or” is pressed here on 180g vinyl. This is the first time it is being released in Mono.

Astrel KYou Could If You Can / Gnistrande Snö (Cover Version)