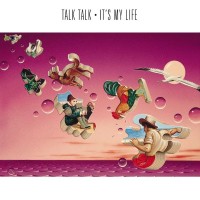 After falling in with the New Romantic also rans via their first LP, 1984's "It's My Life" saw Talk Talk take the charts by storm, helped not least by an absurdly HUGE lead single. Though "Such A Shame" and "Dum Dum Girl" failed to hit the same heights, they provided the group a level of pop success which allowed them to explore their more obtuse and esoteric side on later releases "Colour Of Spring", "Spirit Of Eden" and "Laughing Stock". Indeed, if you wrap your ears around A3 track "Renee", you'll see a band as comfortable in the realm of the sense as the pop bombast the singles suggest. This album, pressed here on Purple Vinyl, defined the 80s in the underground, new-wave scene.

Dum Dum Girl
Such A Shame
Renée
It's My Life
Tomorrow Started
The Last Time
Call In The Night Boy
Does Caroline Know?
It's You