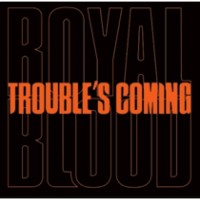 In the space of just two albums, Royal Blood have ascended to become one of the world’s biggest and most vital rock bands. The Brighton duo have scored two UK #1 albums - their self-titled double-Platinum debut from 2014 and 2017’s ‘How Did We Get So Dark?’ – in the process selling 2 million albums worldwide. Their acclaim has included the BRIT Award for Best British Group plus further accolades at the NME and Kerrang! Awards as well as a Mercury Prize nomination. What’s more, they’ve made a major international impact, hitting the Top 10 in a further seven territories and peaking at #2 on the US Alternative Album chart. Further US success has included three #1 hits at Rock Radio, plus four Top 20 records at Alternative Radio.

All of which positions their upcoming third album, due next spring, to be one of 2021 most essential releases. Royal Blood now add to the anticipation for the record by sharing its first single ‘Trouble’s Coming’.

If you think you know what to expect from Royal Blood, think again. Their patented, granite-heavy bass and drums attack is now flavoured by fresh influences: Daft Punk, Justice and the late Phillipe Zdar (one-half of Cassius and producer for the likes of Sébastien Tellier and Hot Chip). As a result, ‘Trouble’s Coming’ infuses Royal Blood’s bombastic uptempo energy with beats.

‘Trouble’s Coming’ concisely tees up what to expect from Royal Blood’s third album: a very organic infusion of their visceral hard rock sting with a disco-tinged rhythm that grooves rather than pummels. And as the duo started work on the project, which they largely produced themselves at The Church and Sleeper Sounds in London, the song proved to be the turning point in the creative process.