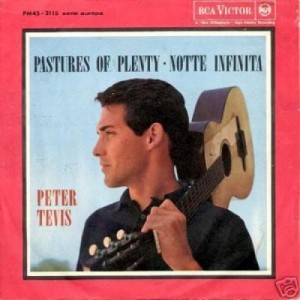 Originally written and released by Woody Guthrie in 1947, this cover version of “Pastures Of Plenty” by Pete Tevis – a Californian folk singer living in Rome in 1962 – was arranged by Ennio Morricone. A few years later, Sergio Leone wanted Morricone to score his up and coming western called A Fistful Of Dollars. Legend has it Morricone wrote some music, Leone hated it. Morricone then played him this old single. Leone wanted this music but with a new melody over the top. The rest is film music history.

This is the first ever repress of this hugely important single since 1962. Originals copies are mythical to say the least.

Side One
Pastures Of Plenty