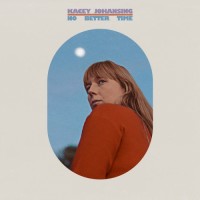 Kacey Johansing will release her new album “No Better Time” on November 20th via Night Bloom Records. The album is an exploration of love and how one accepts it into his/her/their life. It asks how can someone allow love when the past is full of trauma. Can we become someone new and leave behind our former selves? Can place allow us that freedom? How does one find the strength to try again?

Across 11 songs Johansing wrestles to find the answers, her unmistakable vocals always leading the way. Anchored by powerful performances pulled from three days of live tracking with her band all in the same room, the album is bounding and energetic at its core. First takes were prioritized and perfection was rarely the goal. Rather, capturing an emotion and honesty from herself and the players was the rule of the day. The album pulls from Johansing’s love of classic pop—it’s her LA record—the place where she now resides and initially struggled to understand. Joan Didion said, “The future always looks good in the golden land, because no one remembers the past.” Kacey saw that and chose to tap into the creative buzz happening all around her—at small clubs and while dipping in and out of playing in friends’ bands, including in between tours as a member of Hand Habits. The resulting “No Better Time” is the sound of letting go and faithfully falling into step with a new way. There are vibraphones and swooping strings, grand pianos and doubled acoustic guitars, washes of tape delay and woodwinds—but it is the songs that continue to set Johansing apart. Here she unveils her strongest set yet.

Kacey Johansing was born in Kalamazoo, Michigan and raised in the mountain towns of Colorado, the daughter of a miner and a painter. After leaving Berklee College of Music in Boston, Johansing relocated to the San Francisco Bay Area, where she co-founded the duo Yesway and released two solo albums. Later moving to Los Angeles, Johansing released her third solo album “The Hiding” in 2017, which received widespread acclaim from critics and listeners alike and garnered comparisons to Fleetwood Mac, Carole King and Prefab Sprout. She subsequently toured internationally and shared the stage with Real Estate and Fruit Bats, and became a frequent touring member of Hand Habits. She is currently preparing for the release of her fourth album “No Better Time” on her own Night Bloom Records in Fall 2020.