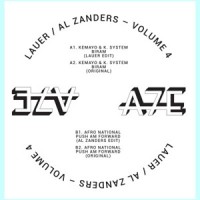 Next up in the Africa Seven Edit series, we have a double header, as leftfield London house bod Al Zanders takes on the progressive early - mid 70's Sierre Leone band Afro National's 'Push Am Forward' and injects added propulsion and focus, creating an intoxicating hypno chugger along the way.

Meanwhile, Frankfurt ressie and Running Back mainstay Lauer gets to grips with Cameroonian Kemayo and K. System's 1978's disco inspired mini-classic 'Biram', adding fizzing drums and rolling structure to the exuberant Back to My Roots style licks and commanding vocals.

Both original's are included, remastered, and both presenting as head to head rival's to any of these new fangled upstarts claim to contemporary dancefloor currency, just as it should be.