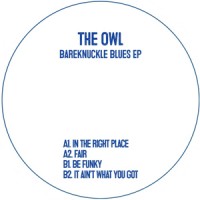 After 3 stomping collaborations with Burnski’s brilliant new label Cardiology Records, The Owl is back on his own relentlessly impressive imprint.

Now he brings us the aptly named ‘Bare-knuckle Blues ep’ serving up four tracks that will raise heads on any dance-floor. Kicking off with the chunky blues stomper ‘In The Right Place’, The Owl instantly shows his intelligence for turning an originally potentially funky number into a big speaker blaster with enough new groove to forget the era it came from, while paying tribute to that time.

Track two, ‘Fair’ has more of an original blues vibe but the percussion suits the bass so well that you feel you’re hearing a live band playing a current track. His clever cuts make it a must for anybody that loves their funk with a bit more ‘pow’.

The B-side does not let up on the level of energy, flying straight into the female vocal gem ‘Be Funky’, yelling through the speakers that “Everything I do gon be funky from now on”. And this is certainly true from the Owl.

The final track is only slightly a step down in tempo from the others but rounds off this classic ‘bluesy-house’ EP in The Owl’s usual classy, funky style. Expect this to sell as fast as he flies.