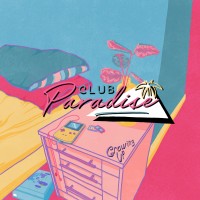 Growing Up is the debut physical release by Newcastle quartet Club Paradise, released on Kids Records (The Wombats, The Whip, Band of Horses, I Like Trains) featuring four epic guitar-pop tracks each, in the words of CMU: "featuring a chorus that will fill every corner of any room you'd care to put it in".

The band have built a fierce local following and have already shared the stage with the likes of Vistas, Apre, Larkins, Kashmere, Vant, Saint Raymond, The Navettes and Only The Poets, as well as picking up early attention from the likes of Clash Magazine, Shortlist and a legion of blogs. Made up of school friends Ryan Young (vocals/guitar), Jackson Vert (lead guitar), Harry Webb (bass) and Nathan Hogg (drums), the band cite the likes of Foals, The Midnight, Jungle and The Horrors as influences, writing tracks reminiscent of an 80s Sunset Boulevard movie montage.