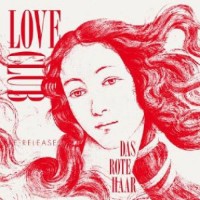 "I first stumbled across this record on a Tony Humphries Kiss FM Mastermix from 1990. While my obsession with vintage Humphries radio shows is no mystery, "Das Rote Haar“ stayed one for a while. With all the ingredients of a novelty record (German lyrics about someone falling in love with a red haired person), but graced with a backing track that sounded somehow like a Ben Cenac or Larry Heard production and not German at all, it was almost impossible to be placed in any corner. A few years down the line, I finally found out that it was by a - surpassingly enough - short-lived German studio project called Love Club. Behind it was one of Germany’s longest-serving DJs: Jens Lissat. Together with Peter Harder they recited a poem by Francois Villon that was made popular by the late German actor Klaus Kinski and built a deep house instrumental around it. According to the creator the idea was indeed to find a groove that was similar to those of the "cool records going out of Chicago and New York at the time“. So there you go. Re-issued, re-mastered and with a re-designed picture cover, it’s your chance to share my joy with a record that is as balearic as it is basement ready. Including a dub and in case the vocal creeps you out, an instrumental version par excellence. But maybe you will fall in love with the red hair, too."
Gerd Janson

Patrick says: Once again Gerd Janson works his reissue magic, bringing us a wonderful German House obscurity he first heard in a Tony Humphries mix. Think Sceneries Not Songs era Larry Heard or Frankie at his most melodious, but with a breathy German vocal on top.