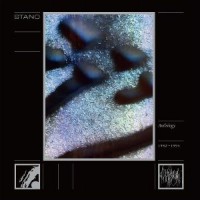 Following on from our 2018 repress of his debut album “Content to Write in I Dine Weathercraft “ we’re delighted to present an Anthology of Stano’s productions spanning the start of his solo career in 1982 to his 1994 “Wreckage” LP. Featuring 18 tracks from the five LPs he released in that time span on double vinyl with extensive liner notes, it is a comprehensive look at one of Ireland’s more enigmatic musical characters.

A member of the legendary punk / post-punk group The Threat which disbanded after lead singer Maurice Foley disappeared to join the Hare Krishnas, he had set up his outsider stall early on. The Threat had Stano on synths, one of the first female bassists in Deirdre Creed and their debut single was produced by progressive trad musician Donal Lunny of Planxty. Stano’s solo career of improvised electronic music continued in this vein of the unexpected – sitting outside both the country’s mainstream and alternative rock scenes.

An indigenous musical industry with few resources even at the top level – studios, labels and venues being scarce – and with few of the cross water big independent acts venturing over the Irish sea to play Dublin in the early 80s, it was an isolated place where due to its intimate size the more traditional rock bands nestled in close proximity to the few electronic acts. News travelled through a small scene via fanzines such as the influential Vox, which was associated with Stano publishing his poetry and releasing his debut 45 « Room », the Peel & Fanning shows of course and the newly established Freebird records.

Eschewing both live performance and the spotlight for studio collaborations he worked with a number of Irish musicians - Roger Doyle, Michael O Shea, Daniel Figgis, My Bloody Valentine - and following the debut on local rock label Scoff records he signed to German experimental label Dossier where a further two LPs – 1986’s The Protagonist 28 Nein and Daphne Will Be Born Again the following year - were released. Signing to U2’s Mother records, he released their first Long player “Only” on the label which garnered praise from the UK music press including LP of the week in The Guardian. The final LP of this anthology featuring collaborations with Colm O'Coisoig of My Bloody Valentine "Wreckage" was released on Independent label Hue Records in 1994.