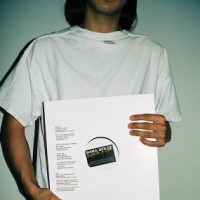 Baba Stiltz returns with this new release on his own imprint; CYCLE. "Running To Chad" hints at a new direction from Baba, with his distinct, laid back vocals finding a home amid some seriously melodic grooves. Strung out and psychedelic, the track rides an exotic rock n roll rhythm (think a very stoned Bo Diddley) sun dappled synths and surf-ish guitars waving like heat haze under Baba's stoner croon. It's like the Beck we wish we had...
On the flip there are two remixes. The first comes courtesy of Jesse, and is Balearic as fuck. Somewhere in furlough land, Andy McQueen is losing his mind to its baggy beat, acid-tinged bassline and endless groove, telling passers by how much it reminds him of the Roses or Beta Band. Closing the 12" out is DJ Python, who deftly blends the melodies of the original around a stuttering beat, reshaping "Running To Chad" in his own Deep Reggaeton style. If you hoovered up those Unkle remixes of Ian Brown way back when, this is gonna do it for you.