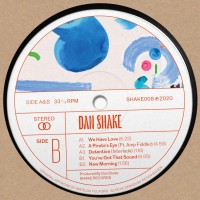 Dan Shake heads on a four track exploration of his chilled and soulful side, and continues to deepen his musical connection with Detroit teaming up with one of the most authentic in the game, Amp Fiddler.

Swapping the usual club surroundings for the peaceful Devonshire countryside and taking a break from the online world, Dan Shake naturally found himself delving into a relaxed state of mind and feeding this back into his music. He’s been teaching himself to play keys, which you’ll hear shine through SHAKE008, all topped by the lush vocals of Amp Fiddler.

Dan has naturally channelled Detroit into his musical endeavours from a young age and although a modest handing of a CD to Moodymann led to his first signing on Mahogani Music, (and Dan the imprint’s first non Detroiter) the foundation actually starts with deep admiration of J Dilla, fascinated by his sampling abilities. Anyone up on hip-hop history will know that Amp Fiddler mentored a young J Dilla. Fast forward to the present day and Amp Fiddler becomes the first vocalist that Dan has ever worked with.

Dan Shake - “This EP is heavily influenced by J Dilla and the way he samples. Studying his music has given me such an education over the years because he not only samples so much amazing stuff, he does it so creatively. J Dilla is largely the reason I got into house music. Amp Fiddler is one of my all time favourite vocalists and producers and so the link here is a full circle moment. I feel very humbled to have Amp as the first vocalist I’ve worked with and if you’d have told my teenage self that this was set to happen, I’d have never believed it.”

SHAKE008 effortlessly glides, and is a true reflection of a hard working and inquisitive artist who is naturally evolving and upping the game wherever he can.