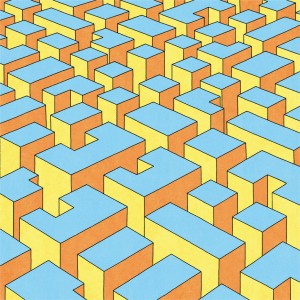 Rickard Jäverlings music can deservedly be described as playful and searching but for that sake not fumbling or too loose around the edges. On Album 4, the second album release from Jäverling on Höga Nord Rekords, he dwells more in dub than on his prior album release, and Jäverlings skillful songwriting is carried smoothly by the soft and fluffy production: the rhythm section sounds as if resting upon a sun warm bed of moss and elements flows in and out of the production like a freshly rippling stream of water deep in the summer forest. Echoes shoots through the pines, the hills and the valleys and makes the album a premium dub experience which dominates large parts of the album.

Aside the obvious references to nature that comes in mind listening to Jäverlings music, this album is more than a romantic view on the Swedish wilderness. It flirts, like all quality dub from the seventies and eighties with science fiction and space with broad synthesizer sweeps and delay drenched clouds like imploding and exploding stars somewhere in the outskirts of the Milky way, spreading dust over the Swedish forest. On the final three tracks, Ganjaman_72 takes the album out of the galaxy with spaced out-remixes on some of the songs.