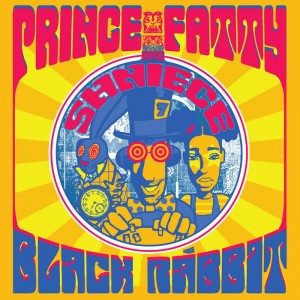 Prince Fatty and Shniece McMenamin have been relentlessly flexing their studio muscles lately, dropping a whole host of projects consistently for your listening pleasure. Next up is a psych-reggae anthem that goes by the name of “Black Rabbit”, a cover of Jefferson Airplane’s 1967 classic “White Rabbit”. Available on a 7” housed in a picture sleeve, with a killer dub version on the flip. After featuring on Prince Fatty’s ‘In The Viper’s Shadow’ album last year, Shniece has played a key role in Fatty’s productions ever since. They have covered Kraftwerk’s ‘The Model,’ Tom Browne’s ‘Funkin’ For Jamaica’ and also worked together on Shniece’s highly acclaimed debut EP ‘Disco Deception.’

A real journey of a record, “Black Rabbit” features 60s mind bending guitar, trippy samples from a public service broadcast on drugs, plenty of delay and reverb with a heavy pounding hypnotic backbeat. With Shniece’s vocals taking on the melody, this is euphoric dub at its finest. On creating the record, Prince Fatty added: “A tough arrangement is always good in the studio and risks tend to bring dub rewards. Reborn as Black Rabbit in a down tempo twist featuring the immaculate Shniece McMenamin on vocals.”