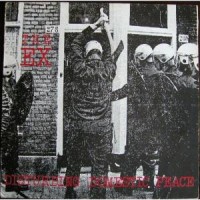 Emerging out of Amsterdam's vibrant squat scene in 1979, The Ex - a name chosen for the ease and speed with which it could be spray-painted onto a wall - have for four decades been an entirely self-sustaining musical entity, charting a course through the global underground with a spirit of freedom and radical exploration. Disturbing Domestic Peace, The Ex's debut album, appeared mere months after their first single, 1980's All Corpses Smell The Same. While The Ex channel the poise and principled attack of Crass or Flux Of Pink Indians, they create a unique declamatory sound all their own - trailing brilliant flashes of color in the wake of punk's monochrome palette. Offering ten songs in only twenty-two minutes, Disturbing Domestic Peace lays bare a vivid snapshot of a truly singular band who (at the time) were just finding their feet. This first-time vinyl reissue comes with bonus 7-inch, inserts and 20-page booklet.

The ExHistory Is What's Happening

Sunny Day Real EstateHow It Feels To Be Something