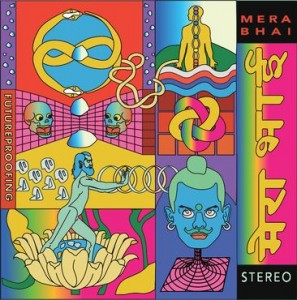 Born in London, with roots in India, alongside time spent growing up in Italy, Albania, Saudi Arabia, Dubai and Nigeria, Mera Bhai’s worldly influence seeps into his unique take on dance music. Known as a founding member of Tropical-Psychedelia band Flamingods, the multi-instrumentalist has worked closely with Moshi Moshi Records, Soundway Records and Total Refreshment Centre.

Hard to pin down, Mera Bhai is centred on a musical balance, between eastern and western traditions, the new and the old. Taking influence from Indian Carnatic music, Arabic Rai and 70s Disco, with a heavy dose of 80s/90s Acid House, Detroit techno and Tropicalia on top. “Having grown up all over the world,” Karthik explains, “I was surrounded by a wealth of different sounds - I’m just trying to weave the cultural through line that I hear in music”.

On newest offering ‘Mañana Groove’, Karthik explains, “I wrote this track during a pretty tumultuous time of my life where I was grieving recently lost family members and coming to terms with fraught relationships. I escaped to India for a few months by myself and set up my studio there, and this was one of the first tracks that I wrote.”
Having started a journey of total sobriety, he continues: “I really needed to feel the carefreeness that comes with being in a club/festival environment and wanted to know that I wouldn’t be excluded from feeling that by being sober. I also felt the need to free myself from what I was going through and transmute my challenging experiences into something positive and happy, and that I could share.”
It is an immediately energetic cut, “it’s a sun-soaked anthem to blast out the windows as you cruise out of town. It’s a careless, “I’ll do it mañana” answer to life’s responsibilities, a getaway tune, here to take us out of lockdown into sunnier times ahead.” Karthik explains.

An explosion of various sounds and influences, the track is inspired by ‘Inspector Norse’ by Todd Terje and is sampled from a Mr. Bongo Record’s reissue (close friends of Karthik), ‘A Son Magni’ by Cissé Abdoulaye. “I wanted to take this tune that’s already in my DJ record bag to another dimension,” he continues, “it also gives a nod to one of my favourite anthems ‘Pacific State’ by 808 State, which frames summertime feels for me.”

Previously releasing debut single ‘Jama El F’Na’, Mera Bhai created a bootleg remix of Ahmed Fakroun’s track, from a crossover record combining Libyan influences with western Europop and dance music, “- very much something that mirrors my story. I guess I’ve subconsciously taken his western crossover and made it into my own.”

The merging of cultures is reflected in the artist name also. Mera Bhai is a Hindi greeting, which translates to ‘My Brother’ - the welcoming implication speaks to the borderless nature of dance music, both in a global sense, as well as personal. Infused with a wide, authentic cultural understanding and appreciation for the way dance music brings people together democratically, Mera Bhai seeks to expand minds, or to simply block out the rigorous day to day, and foster a sense of belonging.