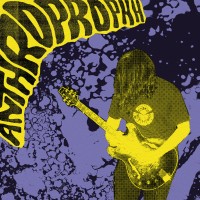 In 1998 Rocket Recordings launched with a debut split 7” between Bristol bands The Heads and Lillydamwhite. So it is fitting that the labels 200th release is a 7” by the band Anthroprophh – the Bristol three piece that features Paul Allen from The Heads and Gareth Turner the former bass player from Lillydamwhite. ‘Toilet Circuit EP’ is the bands first release since their mammoth double album Omegaville which was released to high acclaim in 2018. The three tracks that make up this EP follow on perfectly from the dense and psychedelic sounds of Omegaville – a feverish tirade of maximalism. Anthroprophh manage to find equal space for everything-on-11 riffage of The Stooges, kraut rock repetitions, Butthole Surfers-esque bedlam, and surreal British humour.

A frustrated social commentary of todays paranoid world dictate the subject matter of the three songs on the EP. Six Six Sigma is named after a truly awful corporate training company, Too Old lists the frustrations of age and growing old, and Toilet Circuit is a song about the ‘fun’ and tribulations of touring the ‘toilet circuits’ of the UK. Like previous Anthroprophh releases it is Allen’s guitar playing itself, that transcends the band to ‘higher’ limits. Globally renowned amongst freaks and connoisseurs alike from his untouchable ontributions to The Heads. Taking Hendrix and Asheton-esque shapes and warping them beyond recognition into new paradigms, he also cites guitarists like Michael Karoli, early-‘70s Robert Fripp, Giles Buchan of Human Beast, Fred Frith and Geinrich of Guru Guru as influences, yet this ear-splitting treble-heavy scree and these heavenly FX-driven cacophonies could be the work of no-one else but this particular six-string iconoclast, who drives his trademark sound beyond anything he’s previously attempted in any incarnation. ‘Toilet Circuit EP’ are the first Anthroprophh tracks to feature a new sticksman – the drumming skills of Bristol legend Steve Dew, who cut his rhythmic teeth with Cup of Tea Records band Spaceways and the Bristol psych-jazz supergroup Fuzz Against Junk who released music via Geoff Barrow’s Invada Records. In the tradition of most great out-rock and psych-noise - ‘Toilet Circuit EP’ feels very much like a foot placed firmly on the accelerator in search of dimensions unknown - a liminal zone where fuzz and wah transcend space and time