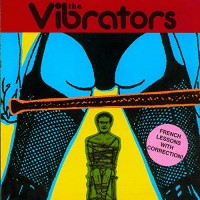 For fans of Sex Pistols, Iggy Pop, and The Vibrators! Legendary Punk Rock pioneers The Vibrators are reissuing their 1997 release French Lessons With Correction! It has been re-mastered by Alan Douches (High on Fire, Mastodon, The Misfits, etc…) and includes the bonus track “Destroy“ recorded during these sessions (original recording from V2), with liner notes by “Vive Le Rock’s” Eugene Butcher. Headed up by founding members Knox (Lead Vocals/Guitar) and John 'Eddie' Edwards (Drums) and joined by Nick Peckham (Bass), the album was produced by The Vibrators and Dave Murder. With a career lasting over forty years, original vocalist/guitarist Ian "Knox" Carnochan, bassist Pat Collier, guitarist John Ellis (Peter Gabriel) and drummer Eddie originally formed The Vibrators in February 1976, and their first gig was supporting The Stranglers at Hornsey Art College in North London.

They supported The Sex Pistols at the 100 CLUB and were one of the bands playing at the now legendary 100 CLUB PUNK ROCK FESTIVAL. Early in 1977 the band supported Iggy Pop (with David Bowie on keyboards) on a UK tour, and released the classic "Baby Baby" single, followed by their first album "Pure Mania" on Epic Records which spent five weeks in the UK Top 75, peaking at number 49. A second single from the album - but a live version - "London Girls", came out in the summer of 1977, followed by "Automatic Lover" (March 1978), which not only reached number 35 in the charts but also got the band on TOP OF THE POPS.

Tired Of Living With You
The Girl's Screwed Up
Shiver
Judy's Killing Herself
Cycle Of Violence
Cold Cold Cold
Party On
Rain Must Fall
Date With Disaster
Juice On
The Evil That Men Do
Don't You Tell Me
Johnny B. Bad
Money Money
I Hate Blind Date
Destroy (BONUS TRACK)