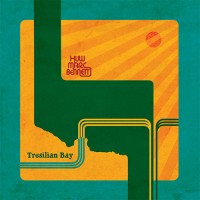 Producer and bassist Huw Marc Bennett presents ‘Tresilian Bay’, a new project that draws from artists such as Tim Maia, Augustus Pablo and Idris Muhammed as much as the jazz scene and community he has found in south-east London. The languid, sultry sound fuses both modern and vintage, travelling from South London electronica, to Brazillian groove, Nigerian Afrobeat and Ghanaian Highlife along with a streak of Welsh psychedelia.

‘Tresilian Bay’ is a nod to hedonistic summer nights, whether spent on the Glamorgan coast or the hot Lewisham streets. The album is titled in honour of the bay near where Huw grew up, an area steeped in stories of ancient Welsh royalty, smugglers and pirates.

The album started out as a lost live session recorded at the Total Refreshment Centre studios, featuring Chelsea Carmichael (sax), Rosie Turton (trombone), Shirley Tetteh (guitar) and Jake Long (drums) with Huw at the helm on bass and compositions. With glorious vocal contributions from Miryam Solomon; Huw utilised his human style of production and multi instrumentality heard in his Susso project (Soundway Records, 2016) to mold these recordings into this mature and emotional debut.

The album was mixed and mastered by Albert's Favourites co-founder Adam Scrimshire with artwork by Jonny Drop.