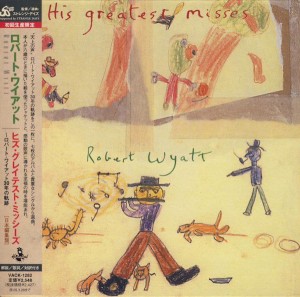 The singular Robert Wyatt releases ‘His Greatest Misses’ - a compilation spanning his decades-long career - on vinyl for the first time ever. Also back in stock on CD.

In its title, ‘His Greatest Misses’ acknowledges that Wyatt’s career has taken place outside the limited space and definition of commercial pop success but simultaneously recognises that Wyatt’s non-careerist career has nevertheless proven both productive and rigorous. The collection, originally released as a Japanese edition, includes selections dating from ‘Rock Bottom’ (1974) to ‘Cuckooland’ (2003), although its running order is non-chronological. This makes the subtle point that Wyatt’s recordings are best considered as a nonlinear catalogue; this is a world through which the listener can move at any pace in any direction.

Born in Bristol in 1945, Wyatt was a founding member of the bands Soft Machine and Matching Mole, before embarking on a solo career. His discography is one that flows with the force and intensity of a river in full spate. Each recording on ‘His Greatest Misses’ is a benchmark in the life and work of a steadfast and true original and provides the opportunity for the listener to enjoy some wild swimming through this powerful, idiosyncratic and unclassifiable catalogue.

The release of ‘His Greatest Misses’ coincides with the release of ‘Side by Side’, a book by Robert Wyatt and his wife Alfie Benge: visual artist, songwriter and the person who has nurtured and overseen Wyatt’s career for the past forty-six years.