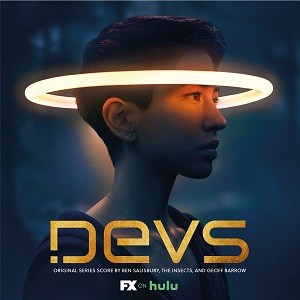 This is the original score to Devs by Ben Salisbury, The Insects and Geoff Barrow. It includes all 37 tracks from the stunning score. Ben Salisbury says, "As with all of Alex's projects, we started working on ideas for the music after reading the scripts, and as well as being blown away by the material, we knew the music would need to reflect the strong religious thread that runs through story, and that we would need a number of developing themes that had a warped devotional vibe to them. But the music also needed to work with the thriller and tension side of things and the moments of outright horror, as well as sitting alongside the sheer beauty and scale of the amazing cinematography and set design. Crucially, the score also had to reflect and emphasise the human and emotional aspects of a story that is ultimately about grief and love.”

Plainsong
Stranger Danger
Amaya Corporation
Entering Devs / The Machine
Stealing The Code
Two Concurrent States (Plainsong Part 2)
Tramlines
Were You Listening?
Suffocation
You're Fired
Christ
Sudoku
Amaya's Theme (Version 1)
The Visualisation Chamber
Reporting A Crime
All Possible Worlds
I'm A Tank
Specifically You
Crash No Crash
Stay In My Bed
Object Input
All Buddies Now
Keep Extrapolating
Someone Crazy
Ad Infinitum Ad Nauseam
Aubade
You Were Counting In Russian
Cause And Effect
Aftermath
The Universe Is Deterministic (Plainsong Part 3)
The Day Will Break
The Second Coming
Resurrection
Your System Breaks
This Is Where You Say Goodbye
Predetermined
Amaya's Theme (Version 2)