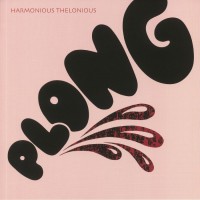 "I was busy experimenting with noisy rhythms when Bureau B asked me if I would like to release an album on their label. I was aiming for a more industrial sound; backwards cymbals, loops generated from non-musical sources such as slamming doors, and had the feeling that this would align nicely with Bureau B’s own story." Stefan Schwander’s new album Plong is something of a hybrid in the discography of Harmonious Thelonious, drawing on his existing strengths plus a sense of adventure in a mix of all his musical predilections. Dipping into the music, Middle Eastern elements can be heard on "Original Member Of A Wedding Band" and "Mumba", whilst tracks like "Höhlenmenschenmuziek" are characterized by more pronounced bass structures. Tuned down xylophones, evocative of ritual drums, sub bass and electrifying basslines catalyse the idiosyncratic sound of Plong: hypnotic, danceable, irresistible. A powerful head of steam builds across the nine tracks, with subtle changes in harmony ("Geistertrio Booking") or unexpected cameos such as a new wave bassline on "Abu Synth" shaking things up before the album hurtles onward with renewed force. Take "Interpretation de reve" as a case in point – floating sequences and themes sweep ashore in wave after wave of melody; analogous to dreams which enter the subconscious in episodes, their apparent randomness gradually shifting into a correlative pattern. "Totentanz" closes the album in a homage to the Basle club of the same name, a place which played a decisive role in Schwander’s musical socialisation: "I was lucky enough to see bands like Liquid Liquid, Gun Club, Jonathan Richman and a very young Aztec Camera there".

Harmonious Thelonious comes off with an exceptional work in the genre of electronic music, successfully embracing the physical power of a club night soundtrack whilst exploring the dramatic depths of sonic worlds to create an intensive listening experience in total solitude.

Patrick says: Durian Bro and Dusseldorf sorcerer Stefan Schwander gets industrial and middle eastern on this Bureau B LP, translating his usual sonic manipulations into a hypnotic set of trance dancers for the alternative club kids. I'm gonna buy like 5 copies of this!

A1. Original Member Of A Wedding Band
A2. Höhlenmenschenmuziek
A3. Geistertrio Booking
A4. Abu Synth
A5. Mumba
B1. Young Kong
B2. Interpretation De Reve±
B3. The Roller
B4. Totentanz