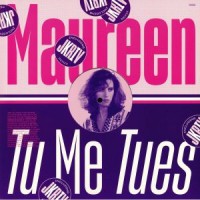 1988: Six years after entering the music scene, and just a few months after the release of the teen, 80s earworm, “Bonne bonne humeur ce matin” by Tristan, the producer and arranger, Michel Bassignani, recorded “Tu me tues” in Belgium. Dissatisfied with the result, Michel went back to the drawing board at Waldbery Studios in Paris recording all instrumentals (except sax). After hearing his new work, Dominique, a high school pal, proposed to sing for Bassignani. Dominique's stage name became Maureen, and in addition to the single and extended versions, the duo recorded a “Dance mix”.