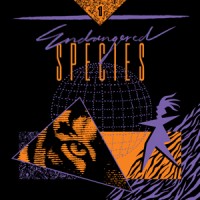 In eleven years of deep digging, Dark Entries has uncovered many curiosities, lone exemplars of the scarsest breeds. They are lurking in Croatia, on the streets of New York, maybe in the back of your own dusty closet - these odd-ball Italo and synth-wave monsters are too rare to live, too divine to die. Once-lost creatures now have a home with Dark Entries’ new Endangered Species series. The inaugural edition features five specimens previously deemed extinct, only mentioned passingly in lore and speculation, but now safely preserved on vinyl.

The first cut on Endangered Species Vol. 1 is the previously unreleased electro-New Wave gem “Munich” by John King, an artist best known for his work as one half of the Dust Brothers, lauded producers of the Beastie Boys’ legendary Paul’s Boutique. “Munich”, a Danceteria-ready cut produced in 1983, sheds some light on King’s earlier interests, bridging between freestyle and emotive synthpop. Next up is a rare demo version of The Actor’s “Picture 210”. The Dutch duo here channel both the minimalism of Kraftwerk and the Surrealism of Throbbing Gristle to create one of the finest teary-eyed Goth club anthems. Brazil is a synthpop band from Croatia, and they feature with their 1990 cover of Tears for Fears’ “Mad World”, which is sure to turn some heads on the dancefloor. The eerily faithful production belies Brazil’s re-working of the song’s lyrics. “L'Étranger (Ana Gharib)” by Jamal Khe follows, a pearl originally only available on an impossibly rare French 7” from 1983. Khe is from the Ain Beida region of Algeria, and his Arabic vocal melodies perfectly complement the propulsive percussion and airy arpeggios from producer Jacky Bourgogne. Closing the record is the previously unreleased “Abemus Mind” from Marzio Benellil’s project Nightless. Recorded in 1983, this moody, low-tempo Italo groover features Gregorian chant-inspired vocoders and jazzy piano courtesy of Benelli’s collaborator Marco Falagiani.

All songs were mastered for vinyl by George Horn. The sleeve is the first in a series of endangered animal designs by Eloise Leigh, featuring the glam tiger in its natural, 1980’s habitat. Also included is an insert with lyrics, photos, and notes. Please assist us in our efforts to preserve this planet’s weirdest beasts.