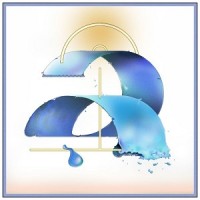 In late November of 2018, long-time collaborators (& life-long Los Angelenos) Carlos Niño & Miguel Atwood-Ferguson flew to Chicago to participate in the album release performance of Makaya McCraven’s Universal Beings. Just 11 months prior, Carlos & Miguel were part of recording the ‘Los Angeles Side’ of Universal Beings at Jeff Parker’s house in Altadena, California, and this performance in Chicago would be the first time that all of the musicians reunited to re-learn and perform the music they’d collectively composed during those sessions.

The night after the performance at South Shore Cultural Center, friend of International Anthem Jeremy Cunningham was scheduled to debut new music (The Weather Up There, which has since been released on Northern Spy Records) at our HQ, Co-Prosperity Sphere. Since Carlos & Miguel were still in Chicago (before they’d head to NYC for a second Universal Beings performance at Le Poisson Rouge), we invited them to do a Special Guest duo set to open the show.

At the conclusion of their 44-minute improvised set that night, Carlos spontaneously dubbed the piece “Chicago Waves.” His proclamation gave us the distinct impression that the previous days spent in South Shore (and the many commutes to-and-from, along Lake Shore Drive) had imprinted the deep blue vastness of early-Winter Lake Michigan into Carlos & Miguel’s respective & collective consciousness, and thus, into the spirit of the luminous music they created that night at Co-Prosperity Sphere. We at IARC are happy to share Chicago Waves with the world in a time when peace-bringing sound and a sweet memory of live music, sparkling inside the collective breath of community in community space, has potential to provide the utmost nourishment.