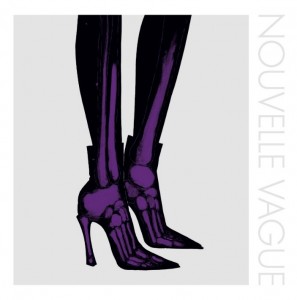 The 80s owed everything to the punk revolution ... and betrayed it time and again.

ln 76-77, the incredible explosion of English-speaking bands focused the energies of a whole generation of Western youth - rebels ready to pick up a guitar and use it like a weapon. Yet more than punk music itself, it was the creative burst it triggered that radically shaped 80s pop and heralded an unending stream of inspired performers.

Although we often speak of the British and American golden age of post-punk from 78 to 84, with artists that included Talking Heads, Joy Division, PIL and Devo, France (together with Switzerland and Belgium) joined the movement too. Today, on a new album, the group Nouvelle Vague have paid tribute to this sumptuous "Frenchy" period clothed in the nihilism of punk, along with bitterness fuelled by the economic crisis and, paradoxically, the bewitching spirit of pop.

lts title, Couleurs sur Paris (Colours on Paris) is based on both a famous postcard collection and Oberkampf's 1981 punk anthem, and reflects the period, which oscillated between elation and despair. Written by artists sometimes known as "the modern young people" and including faux naïf electropop nursery rhymes by Elli & Jacno ("Anne cherchait l'amour", 1979), Lio ("Amoureux solitaires" , 1980) and Etienne Daho ("Week-end à Rome", 1984), along with Lili Drop ("Sur ma mob", 1979) and Taxi Girl ("Je suis déjà parti", 1986), the songs clearly express the hopes and disappointments of the day.

The sense of melancholy suggested by the disenchanted lyrics of "Déréglée" - performed in 1977 by Marie-France, an icon of Paris nightlife - is even more noticeable on the 1981 hit by The Civils, who cynically sang, "Tonight, they're dying in Chad, but l'm buying my dream Walkman" before taking it to the chorus: "The economic crisis is fantastic, decadence is the right feel".

The punk shockwave con also be felt in the music of bands who radically shaped French culture and song. Like Rouen, with Les Dogs ("Sandy, Sandy", 1982), every provincial town and city in France began to produce bands at the end of the 70s and the start of the 80s. Wunderbach's 1983 punk pamphlet "Oublions l'Amérique" was a foretaste of what is now called alternative punk, a genre that won acclaim in 1988 with Mano Negra's "Mala Vida". Indochine, French pop legends for the last thirty years, also encouraged the trend in the summer of 1983 with "L'aventurier", after a first single brimming with the spirit of rebellion, "Dizzidence Politik".

Rita Mitsouko, the duo that emerged from the underground Parisian punk scene of the late 70s, rocketed to stardom in 1984 with "Marcia Baïla". Equally baroque, TC Matic - the first band fronted by Belgian singer Arno - released an ironic, political underground hit in 1983: "Putain, putain". Other artists fuelled a post-punk movement that explored the romanticism of machines and the darkness of new wave, including the cult, much-neglected duo from Nancy, Kas Product ("So Young but so Cold", 1982) and Switzerland's Stephan Eicher, whose "Two People ln A Room" (1985) followed on from "Eisbaer", a hit in a more underground style written with Grauzone in 1981. However, the genre's most influential practitioners were certainly Noir Désir. From their first single in 1987 ("Où veux-tu qu' je r'garde?"), they won mainstream success with their unique fusion of 80s gloom and power rock. Beyond from the meteoric success of Bordeaux's Gamine ("Voilà les anges", 1988) and the subversive spirit of Jad Wio ("Ophélie", 1989), French post-punk reached its climax with the success of Noir Désir, Rita Mitsouko, Stephan Eicher and Manu Chao, whose albums reigned supreme in the 90s French charts. From the underground scene to gold records: the eternal story of pop.