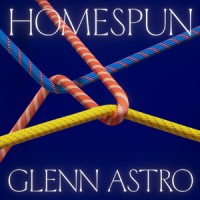 Five years after his critically acclaimed debut album "Throwback", electro-jazz futurist Glenn Astro returns with his ambitious and highly creative new album "Homespun". Made up of ten tracks spanning 45 minutes, the record twists and turns between electronic meditations, soulful vocals by Ajnascnet, and hi-tek electro, carving out a world of spacey eclecticism that is as nostalgic as it is experimental as it is mutant.

“This album is in all facets different from the first one, which was a deliberate decision. No vintage sounds and references, no sampling, combined with futuristic sound design and song structures. I tried to keep it as current and intuitive as possible,' he says.

Known for his chunky beats and fuzzy textures, Glenn Astro has released on labels such as Ninja Tune and Apollo, leaving a distinctive signature on everything he touches. But Glenn Astro has quietly been crafting a new sound for himself. Sometimes taking detours - morphing into his dark alter ego and experimenting with artist collaborations.

On the introspective first single and album title track “Homespun,” Ajnascent’s vocals lend a sincerity to the melancholic production. “It’s about the regret of not taking chances and giving in too much, but also about taking responsibility and being honest with yourself. Homespun is a nod to nostalgia and a desire for simplicity and prudence, being equally the culprit and the cure,” elaborates Ajnascent.

On “The Yancey,” an homage to J Dilla, Glenn Astro paints his vision of contemporary dance music with shimmering melodies, deep ambient soundscapes, and advanced drum programming. “Moreira” and “Look at You” feel like spaced-out electronic funk hybrids, while “Taking Care of Business” goes back to the future with Glenn Astro’s take on jungle. Other tracks such as “Mezzanine,” “Slow Poke Flange,” and “Viktor’s Meditation” provide the finest dubby electronics. It's a wide-screen, multi-dynamic experience from beginning to end and we're here in the shop absolutely f---in love it!