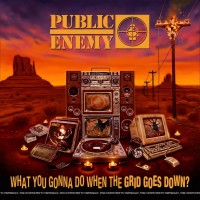 Public Enemy rewrote the rules of hip-hop, becoming the most influential and controversial rap group of the late '80s and, for many, the definitive rap group of all time. Building from Run-D.M.C.'s street-oriented beats and Boogie Down Productions' proto-gangsta rhyming, Public Enemy pioneered a variation of hardcore rap that was musically and politically revolutionary. With his powerful, authoritative baritone, lead rapper Chuck D rhymed about all kinds of social problems, particularly those plaguing the black community, often condoning revolutionary tactics and social activism. In the process, he directed hip-hop toward an explicitly self-aware, pro-black consciousness that became the culture's signature throughout the next decade. While Public Enemy's early Def Jam albums, produced with the Bomb Squad, earned them a place in the Rock and Roll Hall of Fame, they continued to release relevant material up to and beyond their 2013 induction. Now, Public Enemy is back, and is ready to tell the world to once again FIGHT THE POWER!