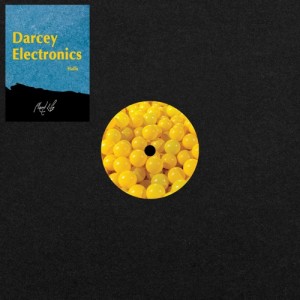 The incredibly named Alasdair Tropical (heads will know from LYL Radio and Ransom Note) launches his Plant Life imprint with a sumptuous and surreal dance-not-dance EP from Darcey Electronics AKA Darling & Tracey. Acting independently the Amsterdam producers have previously dropped Piccadilly approved releases on Off Minor, Safe Trip and Voyage Direct, and now make their tag team debut for the inaugural Plant Life.
If you've kept your head in the game, you'll understand the aesthetic already - quantum rhythm programming, fractal electronics and hypnotic arrangements designed to send the listener into a state of hallucinogenic rapture. Opener 'Morgen' circumvents the dancefloor traffic, gentle changing lanes between house and electro as staggering percussion makes room for a rubberized bassline. Groove established, the duo substitute your SSRIs for echo drenched chords and lyrical keys, encouraging a higher state of club consciousness right from the off. Driven by a hypnotic sequence, swelling bassline and mechanical rhythm, "Handbird" softly nudges us down a psychedelic wormhole, the whispered female vocals promising the paradisiac at the other end.
With my salad days behind me, I appreciate an opportunity for half-time dancing, and the B-side delivers with deranged majesty. If you're old, you can sway to the phasing slank which woozes away throughout "The Berries", while young uns can take full advantage of the nuanced hand drums which more than make up for a lack of kick. Chirruping voices, digital idents and celestial keys convey a Balearic warmth or tropical haze, though in reality we're probably holed up in the Holodeck. Darling and Tracey close the curtain in utterly cosmic circumstances, locking into the sci-fi stylings of "Auto Zap" a trippy mélange of bleeps, whirrs, chimes and blurs which shifts gears from an opiated 70bpm to the racy 140 of the second half without sending your heart rate out of whack.

Purple MountainsAll My Happiness Is Gone