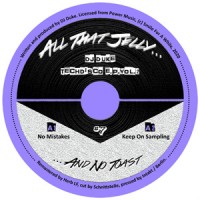 Record Label
All That Jelly

Duke about this EP:

'Ironically one of my very first records was a disco sample in 1990 taken from Queen Samantha. I don’t know exactly what inspired me, but likely coming from the Hip Hop world where everything was looped and sampled brought me to doing the same for house and therefore the disco, funk etc samples for the house stuff. The first techdisco EP was done in 1995. I think there may have been a handful of other house records out that sampled disco tracks at the time. Harvey Mason’s Groovin you comes to mind. Sneak also had done a few, but maybe Pal Joey was one of the originals too that used loops, particularly Dance by Earth People. Joey also came from the Hip Hop world so we likely were inspired by the same style of loops...The main concept was the idea of fusion. I was heavily into fusion jazz in the early 90s and that is really what spawned the techdisco and techfunk series. A mix between genres that hadn’t really been done before. Not saying I was the first, but I did my best to create a new and distich style. ... I did everything myself when it comes to the techdisco series. In 1996 I traveled a lot DJing, in the states but mostly in Europe. I didn’t have time for a resicency at that time like I had prior to me being full time DJ/producer/label owner. I did do some remixes back then, but maybe not as many as I would have thought. Perhaps because people looked at me as having my own label and doing my own thing.'

Matt says: Taken from a incredibly revolutionary and creative spell for house music, this oft over-looked DJ Duke masterpiece stands up well as a brilliant, early example of the disco-house blueprint executed with aplomb. Flawless!