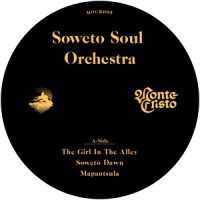 Soweto Soul Orchestra is produced and composed by Sipho "Hotstix" Mabuse, whose importance to South-Africa's music scene can hardly be underestimated. Being a formative member of The Beaters, which was later renamed Harari, he toured Africa extensively and even hit the American charts with their "Party" single. After Harari split in 1982, Sipho went solo and scored another hit with "Burn Out", which could be heard in every township, and produced and recorded for Hugh Masekela and Miriam Makeba among others.

The Soweto Soul Orchestra project boasts a variety of funky tracks, all marked with that jazzy South-African sound. The stand-out tune on this one, for us, is the epic 8 minute long cosmic disco cover of "Hang em High", the original soundtrack for the eponymous classic Western movie.

This 2020 re-issue sees all tracks cut again from the official studio files, ensuring both audio quality and originality.