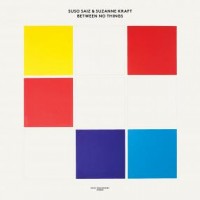 MFM048 sees the release of a special collaboration between two unique voices within the ambient landscape, Suso Sáiz & Suzanne Kraft (SK U KNO), with their collective debut album ‘Between No Things’.

Whilst having first connected at a Gaussian Curve release show in Amsterdam back in 2017, in which both musicians also performed, the two really got to know each other during a three day recording session that followed immediately after; “We would have good chats and laugh setting up and in between long takes but, for the most part, we almost didn't talk when recording.” An instant apparent chemistry between both was present and which, via effortless experimental jams, resulted in over 30 hours of raw material that would sit silently untouched until the tracks were slowly narrowed down to a potential album in late 2018.

Treated with overdubs and edits by the duo at Suso's studio in Madrid in 2019, the album slowly began to take on it’s final form. It would eventually be completed when Suso sent one final piece, resulting in something of a remote jam session between the two, which would become the closer of the record as well as the title song. Fully improvised, ‘Between No Things’ is an honest musical reflection of a new friendship between two kindred musical spirits, in its purest form.