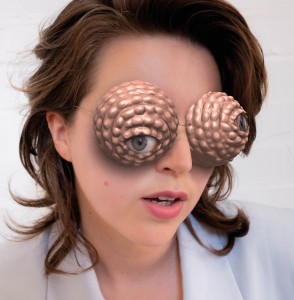 The universality of music can mean different things to different people. For Albertine Sarges – Berlin-based musician and producer – it’s a vessel that she uses for self-exploration and growth, never more so than on her new album The Sticky Fingers.

The Sticky Fingers has its roots in the south of the German capital – Albertine grew up in Kreuzberg during the fall of the Berlin Wall and records in nearby Neukölln - but from there its branches shoot out to take in feminist theory, musings on bisexuality, gender stereotypes, depression and mental health. These topics fall under the ever-shifting veneer of Albertine’s chameleonic pop motifs: from Viv Albertine-inspired post-punk and kaleidoscopic dream-pop to quiet-loud guitar squall and Merrill Garbus-reminiscent vocal acrobatics.

With her debut, Albertine Sarges demonstrates yet again her versatile musical talents, creating her very own world, a world in which community and open discourse count. The Sticky Fingers is an album that fights for your attention. It’s an album with twists and turns, emotional peaks and troughs and lyrical themes that are at once intensely close to their author’s own life, yet also universal and able to connect on a much broader level – something that is the mark of all great pop music.

Barry says: Airy melodies and crisp percussion form into a driven but weightless collection of perfectly progressive melodies and perfectly formed vox. Happily floating between the grooving punk of Courtney Barnett and the Kosmische synth soundscapes of the International Teachers of Pop.